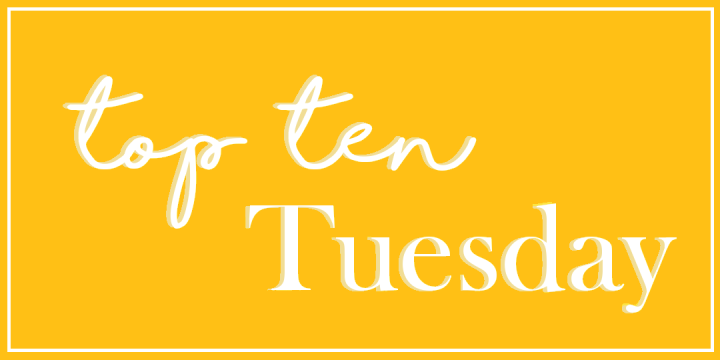 Top Ten Tuesday was created by The Broke and the Bookish and was moved to That Artsy Reader Girl. It was born of a love of lists, a love of books, and a desire to bring bookish friends together.

This week’s prompt is a page to screen adaptation freebie, so today I want to talk about things that make a great adaptation. Despite what a lot of fans might want, I don’t think that something being different from the book is valid or really good criticism. However, there is an art to adaptation and I do think that you can easily butcher the source material. So here are (almost) 10 things that I think make a good adaptation.

This is the most important thing going into an adaptation and really applies to all my other points. Adaptations that lift the entirety of the book from its pages and put it on screen tend not to work, because not all parts of a book work visually or in terms of pacing.

The first Pretty Little Liars book makes up just the pilot episode, because a slow burn book series might work but it doesn’t translate well to an addictive TV series.

2. Modernise It (If Needed)

I don’t have a specific example for this, but I’ve found with classic sci-fi, there are a lot of brilliant writers who could think about the future in ways that still astound readers today. However, they were often short-sighted on gender and racial politics. Outdated race/gender dynamics, unless being commented on, would pull me out of the story immediately.

The script might be good, the style might match the original, the tone might be fantastic but if the characters have been miscast, it’s really distracting. Whitewashing is a huge issue and if your character is informed by their heritage, that matters and affects the plot. I can’t watch whitewashed characters without being distracted by what a glaring mistake it was to cast them.

4. Know Which Scenes/Plot Lines are Unnecessary

Purists are going to put me on a pyre, but I think it’s fine to cut things from an adaptation as long as it doesn’t take away from the story. A book can be 200 pages long, it can be 500 pages long, it can spend that time on things that build the world and add richness and complexity to the characters. Films and to a certain extent, TV shows, tend to focus on the bigger plot, and can’t always fit small scenes into the mix.

5. Know Which Characters are Necessary

Some characters just can’t make the cut in an adaptation. Sometimes they’re cut completely, sometimes they’re combined into one character. The question has to be: does this character add and inform the plot? If not, then it’s okay to cut them.

Based on Pride and Prejudice, The Lizzie Bennet Diaries opts to cut two of the Bennet sisters out. In the original, they mostly function to add to the burden of financial troubles in 19th century Britain – 5 unwed sisters, unable to inherit, was a big problem and makes Lizzie’s rejection of suitable partners a huge issue but that just doesn’t translate to modern society anymore.

(Also, I had to Google the names of the other sisters, so that tells you how much of an impact they had. Sorry Mary and Kitty.)

6. You Can Build on the Source Material

I think people can have a lot of patience with books. If you’re not feeling it right now, you can take a break and come back to it later when you’re in the mood. You tend not to do that with films (actually, my parents hit pause on a film and will come back to it the next night, but that’s just weird…). So if there’s something extra added to keep you hooked, to explain things a bit better, to fuel the excitement, I can get on board!

What often frustrates about film adaptations is that studios opt to make a film that sticks to a formula. They tend not to take risks, dumb things down or focus on a different part of the plot. I Am Legend is such a clever book and the point of it lies in the ending, where the Hollywood version chooses to go down a safe, standard, apocalyptic route.

8. Audiences Shouldn’t Have to Read the Book

This one is pretty self-explanatory, but a good adaptation shouldn’t rely on anyone having read the book to understand it. Yes, adaptations  appeal to the original audience but they’re also inviting a new audience in and should be able to stand on its own. No one is obliged to read the book.

9. Is There Enough Story to Adapt?

Making the judgement between whether there is enough material to adapt something to a feature length film is difficult. Arrival, for example, is a short story but a high concept one so it works as a standalone adaptation. The Hobbit on the other hand, despite being a reasonably long book, is not an epic quest that was worthy of 3 films. Bulking something out to that extent doesn’t make it enjoyable to watch.

What do you think? Are you a purist?

If you liked this, check out my post on which books I thought were actually improved in their adaptation here.

20 thoughts on “TTT: How to Make a Great Adaptation”