Set on a council estate tower block, Run, Riot begins with an act of police violence that results in the death of teenager Sim Francis and tracks the 2 days that follow. From the moment that the murder of Sim Francis is witnessed and recorded by Hari and Jamal, the pair plus teens Taran and Anna, find themselves being chased by the police, trapped in their building, desperate to upload the video online.

Run, Riot has been described as the UK’s answer to The Hate U Give. Thematically, that’s accurate; it addresses the heavy topics of police violence, class, race and gentrification. It explores how these issues relate to capitalism and politics too. It’s an impressive list of topics being tackled and unpacked in such a short book. It’s also a very timely book, published not long after the Grenfell Tower tragedy and includes an author’s note explaining that it was written and conceived before the fire. I definitely saw parallels between the way that working class people are treated in this book by the council with the reality of the response to Grenfell.

Having said that, I think Run, Riot doesn’t quite hit the mark and didn’t leave the impact I had hoped. These are heavy-hitting topics and in order to address them in a book set across two days, a lot of subtlety is lost. The Big Points are made through direct statements and thoughts, with characters clearly acting as an authorial mouthpiece.

Taran feels a rush of warmth. Beth and Ollie started off terrified, ready to call the police. But as soon as they recognised Taran, knew she came from the block, and realised she and her friends were in trouble, it changed to concern. Community, Taran thinks. In the end, you’ll always want to help one of your own.

In the above example, we’ve been shown this already through action and dialogue, but rather than letting the narrative speak for itself, moments like these feel like you’re being hit over the head with the point. Perhaps this is a deliberate attempt to ensure that a book aimed at a younger audience makes a clear point but it felt too on the nose for me. The inclusion of a gentrification plot surrounding NewGen Properties although reflective of real life, is also built up very quickly meaning that hints are dropped all over the place that they are involved with the murder somehow. 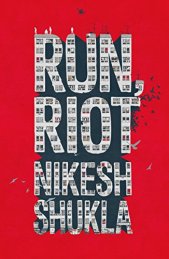 The narrative shifts between hours and minutes and the book is split into Day 1, Day 2 and Day 76. The writing is choppy however, when the narrative jumps between different times these often come with a shift of perspective and it’s a little clunky. I sometimes had to reread the first sentence of the section to remind myself which character we were seeing the perspective of. It’s also very dialogue heavy and I kept thinking that this would work better as a screenplay. It also means that the main narrative tension that is running from the police and trying to upload the the video is lost a little.

Here’s where I think the book is really solid: from Sim to his brother CJ who deals drugs to Old Man Patrick who needs an oxygen tank to breathe, every member of the community that the teens come across and are aided by in their chase is clearly fleshed out realistic. There are also very real moments in the book that rang true to me, such as Hari, an Indian teen’s behaviour to protect himself against racial profiling.

Be invisible, that’s what his mum had taught him – blend into the background, don’t give anyone an excuse to grab you, give you shit, make you feel like you don’t belong.

In contrast to this, the adult antagonists; the police officer and an employee of the nefarious NextGen properties, are almost cartoonish. They didn’t feel intimidating to me and read like villains written for children. In fact, I found them interchangeable at times and couldn’t track whether the book was talking about one character or another.

Okay, so I cheated a bit with my title and here comes the disclaimer: I’ve only seen the THUG film. So I can’t account for the writing but Run, Riot is definitely not as impactful. It’s a smaller story, there isn’t as much drama and the narrative focus on multiple character means that there’s less for the reader to hold on to. It is in the same vein however, and would definitely be an eye-opener for international readers. Class issues and police violence are a huge unspoken taboo in the UK but they exist and this book certainly reflects it. I think this would be a very accessible book for international readers, I just didn’t gel with it personally.

Have you read Run, Riot? What did you think?