It has been snowing a lot in London this week and I couldn’t help but think of The Snow Queen by Hans Christian Anderson. This is the story that Disney’s Frozen is inspired by but it is very different and maybe even more interesting. It is a long one though, made up of seven stories, so get comfortable.

The Snow Queen or Snedronningen

The First Story: Which describes a looking-glass and its broken fragments

This fairy tale opens with a demon who creates a magic mirror that reflects beautiful things as horrible. Some lesser demons think it will be hilarious to see how the mirror reflects angels. They fly towards heaven, the mirror slips and falls down towards Earth, shattering into thousands of pieces, some of them landing in people’s eyes and hearts making them see ugliness everywhere and turning their heart into lumps of ice.

The Second Story: A Little Boy and a Little Girls

Enter stage right: a pair of (poor) golden-haired children called Kay and Gerda, who are neighbours and basically siblings. They have rose bushes that grow in their window boxes (this is important). Although parents are briefly mentioned they disappear leaving just Kay’s grandmother. She tells them about the Snow Queen who flies through snowstorms and freezes ice onto window panes.

A few flakes of snow were falling, and one of them, rather larger than the rest, alighted on the edge of one of the flower boxes. This snow-flake grew larger and larger, till at last it became the figure of a woman, dressed in garments of white gauze, which looked like millions of starry snow-flakes linked together. She was fair and beautiful, but made of ice – shining and glittering ice.

One day Kay is struck by something in his eye and something in his heart: the demon mirror. He instantly changes; he calls their roses ugly, makes Gerda cry and then tells her she looks ugly when she cries. He takes his sledge out to play and ties it to a cart to get a free ride. It’s the Snow Queen’s cart. She drives away, out of the town and then stops, wraps Kay up into her fur and kisses him on his forehead. This is a magical fairy tale kiss that makes Kay forget Gerda, his grandmother and his home. The Snow Queen steals him away.

Third Story: The Flower Garden of the Woman Who Could Conjure

Gerda is loyal AF and has a strange affinity with nature. She thinks Kay is dead but the sunshine and sparrows tell her they don’t believe it. So Gerda decides to go on a rescue mission. She gets carried down on the river and ends up at a cherry orchard. She’s welcomed in by an old lady (a kind witch) who likes Gerda so much that she decides she wants to keep her as her daughter in her garden of eternal summer.

The old lady makes the roses in her garden retreat to the ground so that Gerda forgets about her mission. But one day Gerda notices roses painted on the old lady’s hat and remembers Kay. She asks all the flowers in the garden if they have seen him. Unfortunately the flowers are more interested in telling their own stories than helping her (Anderson tells us several of the flowers’ stories but I’ll skip past that). Gerda runs away from the garden and discovers that it’s now autumn and she’s wasted a lot of time.

Fourth Story:  The Prince and Princess

Our golden-haired heroine eventually meets a crow who claims he’s seen Kay. He claims Kay married princess and has forgotten all about her. Gerda is not put off, memory loss is easy to overcome in this story. We get a little side story about the princess and her quest to find a husband:

‘They gave notice that every young man who was handsome was free to visit the castle and speak with the princess; and those who could reply loud enough to be heard when spoken to, were to make themselves quite at home at the palace; but the one who spoke best would be chosen as a husband for the princess.’

A poor boy turns up who says he isn’t there to woo the princess, but to hear her wisdom. Of course he’s chosen as her husband. (This btw is exactly how to seduce a princess: appeal to her intelligence.)

The crow agrees to help Gerda sneak into the royal bedchamber where the prince and princess are sleeping in beds that look like lilies.

Of course it isn’t Kay, and Gerda begins to weep, waking up the royals. The royal couple, after hearing her story, agree to help Gerda. They dress her in silk and velvet, give her fur boots and a golden carriage along with a footman, coachman and a horse send her off towards the forest to find Kay.

Riding in a carriage made of solid gold, Gerda gets robbed. Her coachman and footman are killed but she is spared because a little robber girl takes a liking to her. Gerda is taken to the robbers’ decrepit castle and shares her story with the robber girl. Hundreds of pigeons and a reindeer, belonging to the robber girl, overhear her story. A pigeon tells her that Kay is with the Snow Queen in Lapland and the reindeer pipes up – Lapland is his home. The robber girl agrees to let the reindeer free as long as he delivers Gerda to the castle of the Snow Queen.

Sixth Story: The Lapland Woman and the Finland Woman

The reindeer and Gerda, for reasons unknown, visit an old Lapland woman’s hut where they are fed and watered. The reindeer tells his story first and then Gerda’s story (I’m sure that in the reindeer’s eyes, he is the protagonist of the story). The Lapland woman has bad news: the Snow Queen has moved to Finland and they have over a hundred miles to go.

Guided by the beautiful blue northern lights, they go to the Finland woman’s house and she’s got ALL of the information.

‘Little Kay is really with the Snow Queen, but he finds everything there so much to his taste and his liking, that he believes it is the finest place in the world; but this is because he has a piece of broken glass in his heart, and a little piece of glass in his eye. These must be taken out, or he will never be a human being again, and the Snow Queen will retain her power over him.’

The reindeer asks whether this fountain of all knowledge can give Gerda something to fight the Snow Queen with, to which the Finland woman is tells them don’t worry. Gerda is already powerful.

‘She cannot receive any power from me greater than she now has, which consists in her own purity and innocence of heart. If she cannot herself obtain access to the Snow Queen, and remove the glass fragments from little Kay, we can do nothing to help her.’

The reindeer then takes Gerda almost all of the way (for fairy tale reasons) to the Snow Queen’s palace. Gerda is met with the Snow Queen’s army of snowflakes who appear as fearsome animals but she prays, her breath turning into angels who shield her and protect her from the cold.

Seventh Story: Of the Palace of the Snow Queen and What Happened There at Last

The Snow Queen’s palace made of snow, lit up by the aurora borealis but is large and empty. Icy cold and glittering. Beautiful, but without any life.

The Snow Queen is away and Kay is alone in the throne room playing with shards of ice. If he can form the word ‘eternity’ the Snow Queen will let him leave AND give him a new pair of skates (what a generous antagonist).

Gerda enters, spots Kay and rushes towards him. He doesn’t recognise her at all, she cries and her hot tears melt his icy heart. Kay cries too and washes away the piece of glass from his eyes, finally recognising her. She then weeps with joy because crying is Gerda’s superpower. She kisses him and her kisses bring colour back to Kay’s cheeks. Their joy is so infectious that the pieces of ice start dancing and form the word eternity. Kay is free!

They return home and realise that they have both grown up and are adults now. They forget all about the cold empty grandeur of the Snow Queen’s palace (this is definitely a recurring theme). Grandmother, meanwhile, has been sat reading aloud from the Bible this whole time.

And they both sat there, grown up, yet children at heart; and it was summer – warm, beautiful summer.

The Snow Queen: She has some really cool abilities: transformation, power over snow and memory. Despite being the eponymous character she’s mainly used as a plot device to allow Gerda to go on her adventure. The parallels between The Snow Queen and the White Witch Jadis in C.S. Lewis’ The Chronicles of Narnia are very obvious. The character is much better utilised in Narnia.

Gerda: Determined, loyal and brave which is unique – girls in fairy tales tend not to go on adventures and do the rescuing. But she cries a lot, which as a modern reader, feels a little jarring. This is understandable; she is a child but could also be a reflection of her purity and innocence (which in turn is linked to the Christian views of the time).

The Princess: Though she appears only briefly, her story is quite progressive. She opts to get married and finds a man who is her equal in intelligence.

The Robber Girl: A tough character, and perhaps the only one whose place in the good/bad binary is a bit blurred. Her portrayal is frankly a little racist because she is the only character that is described as dark skinned with dark hair and dark eyes in contrast to Gerda’s fair blonde innocence. She is also problematically described as wild and violent with her mother being unfeminine (bearded) and a drunk.

Magic mirror: An evil mirror that reflects back a distorted view of the world created by demons is so dark and sounds like something out of Paradise Lost and it is excellent.

Magical kisses: The Snow Queen’s kisses make Kay forget and feel cold which is contrasted with the purity of Gerda’s kisses that restore colour to his cheeks. Not true love’s kiss though.

Memory enchantments: Used both by the evil witch in the story and the benign witch. A recurring theme in fairy tales is the underlying sense that magic (especially in the hands of women) is not a good thing.

In the world of fairy tale, this is a happy ending. Outside of this normative however, you can see that Kay and Gerda have wasted their childhood chasing after each other and have both left the poor grandmother alone. They have been missing for years and then they forget all about their trauma too, not exactly the most satisfying ending for the modern reader. 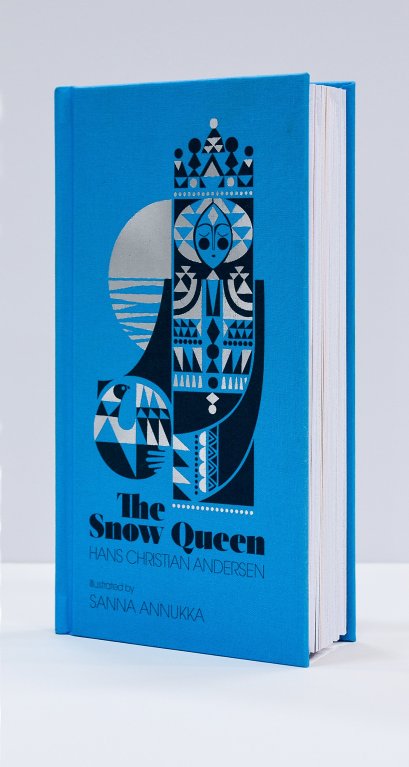 Look at the beautiful, Nordic inspired edition by Penguin and illustrated by Sanna Annukka. Get it from The Book Depository here.

All quotes are from the Project Gutenberg translation.
I am a Book Depository Affiliate and will receive a small percentage of the price of the book if you purchase through my link.

So, I hand it over to you – have you read The Snow Queen? What did you think of it?