Today I’m going to review Unbreakable Kimmy Schmidt…or list reasons why I love Tina Fey. Tina Fey is my favourite comedian at the moment, but what with 30 Rock having ended so very, very long ago and she having hosted only so many Golden Globes, my Tina well has been running a little dry lately (I have yet to read Bossypants and her next film is out in many many moons). So when I saw Unbreakable Kimmy Schmidt on Netflix, it was everything I had been waiting for.
So if you don’t already know, Unbreakable Kimmy Schmidt is Tina Fey and Rober Carlock’s latest creation. And if you liked 30 Rock (because why wouldn’t you?), you’ll like this. It’s clever, it’s funny and it is just that right amount of zany (well as zany as you get for something that isn’t completely hipster). After being kidnapped and trapped in an underground bunker as part of an apocalypse cult (it IS a comedy, I’m sure of it) Kimmy Schmidt, as well as three other “Mole Women”, as they’re named, are freed and allowed to return to their lives. Kimmy decides to stay in New York City, and of course hilarity ensues as we see her adjust to the cultural shock of rejoining the real world.
We follow Kimmy as she experiences “adult” life for the first time from getting a job, to going on dates and throwing a birthday party. And I’m not doing the series any justice because that sounds like the list from a chick-flick, but Kimmy Schmidt has so much more substance than that. By creating a character that has missed out on the past decade and a half, Kimmy’s references are outdated, her surprise at new tech like phones – “Is that a Macintosh?!” – is delightful and her attempts to blend in to society rather than be labelled as a “Mole Woman” always hit the right note. 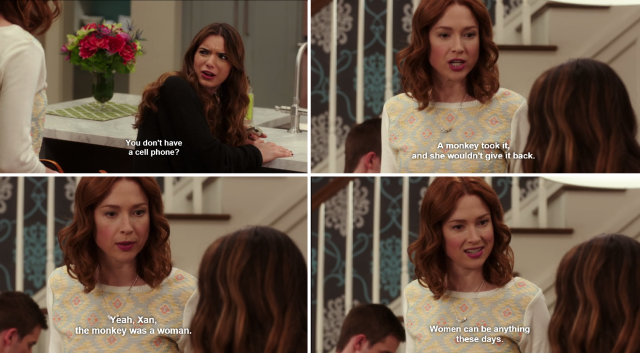 But more than that, this show is crazy empowering for women. Wrapped up in a comedy is a really feminist piece. And the beauty of it is, it never feels like it’s shoving anything down your throat – it’s slipped in beautifully because although it attempts to make light of the cult, there are definitely moments where Kimmy Schmidt, the voice of sunshine and happiness switches it all off for the reaffirmation that you are strong and that even after the worst thing that can ever happen to you, you can’t be broken! The title sequence itself features the lyrics “But females are strong as hell” (and you have to see it, it’s a really catchy song).
This traumatic experience really grounds the character and whilst her sunny disposition and desire to fix the lives of those around could easily allow her to fall into the MPDG trope she doesn’t. Kimmy’s character is exactly the right mixture between a tween (as she was kidnapped in eighth grade) and an adult (she admits that there was weird sex stuff in the bunker). She’s excited about new opportunities as reflected in the episode titles, “Kimmy Goes to school!” and “Kimmy Rides a Bike!” and so on. Yep, that includes the exclamation mark. Wanna know why? Because she’s just so darn excited about life.
Let’s talk about the other characters in this show, because I feel like there are very few side characters here. We do have a couple of stereotypical characters – Kimmy’s employer, the trophy wife, Jacqueline Voorhees and her bratty stepdaughter, Xanthippe. But even I have to admit, that sometimes those stereotypes just work. You also have the mad landlady Lillian who is the right balance between caring and crazy – she hangs about outside their apartment, sometimes looking through people’s windows, sometimes smoking a cigar, sometimes waiting with a baseball bat studded with nails – but she will help her gay tenant film his music video. That tenant being Kimmy’s room mate and aspiring actor Titus Andromedon. Yes. That is his name. He is brilliant. He is a drama queen, he’s a little bit selfish but ultimately he’s a good friend. Kimmy’s Korean friend brings a different perspective on the culture shock she’s feeling with ample opportunity for jokes such as his listing of American films and t.v shows “Wall Sugar” (Wall Street) or “Six White Complainers” (Friends) to his fake American accent and name in fear of deportation. And even the Reverend Richard Wayne Gary Wayne who locks them all up? Brilliant. I don’t want to spoil it too much but they really get round the whole creepy preacher character. Any I’m going to say it, the script is wonderful, the actors are excellent, I have very few complaints.

Xanthippe left. “So true” is her response to the final text. I kid you not.
I’ve been singing the praises of this comedy but it doesn’t quite hit the 5 Star mark for me. I’ve read a few reviews and something that was highlighted was how the show may have a racial representation problem – from the portrayal of Dong, Kimmy’s Korean friend, to the neighbour in the opening credits, to Jacqueline as a Native American character who broke away from her roots only to lose her identity. Personally, I don’t think I’m acquainted enough with Native American culture to comment on the Jacqueline situation too much, though this addition to her personality did feel a little bit contrived and as if something else could have been in her background to serve the same effect. My biggest complaint about the show itself would be the portrayal of Logan Beekman, a charming love interest. With an English accent. I was pleasantly surprised at first that they had put forward a positive role in an American comedy for someone British. I was mistaken of course. Just stop doing it America. I just don’t think appreciate the fact that the English guy will never get the girl and that he’ll always be an idiot. While Unbreakable Kimmy Schmidt isn’t the worst example of this, it’s still an example of it and I’m not happy.
I feel like I haven’t given the best overview of the the show because I haven’t received the best overview due to the nature of a Netflix release. I think thirteen episodes is a good number in a series – I like quantity over quality – but having to essentially rush through the season, or if you end up binging, the ending seems to come rather quickly. You also lose a lot of impact of the season – connecting with characters for example. It takes a lot longer to feel that the show has hit its stride – in my mind it was about five or six episodes in where I had decided that I definitely liked this show and wasn’t just mindlessly watching it because it was easily accessible, where I think it should be around the third (as it has been with the latest season of Community). I realise that there’s a demand for simultaneous seasons and yes, I am my own boss and I control how many episodes I watch, except let’s be honest, I don’t.
I just want to end with two thoughts – I’m very keen to emulate Kimmy after seeing this series by buying yellow and floral and just happy prints and bottom line is GO WATCH IT! 🙂